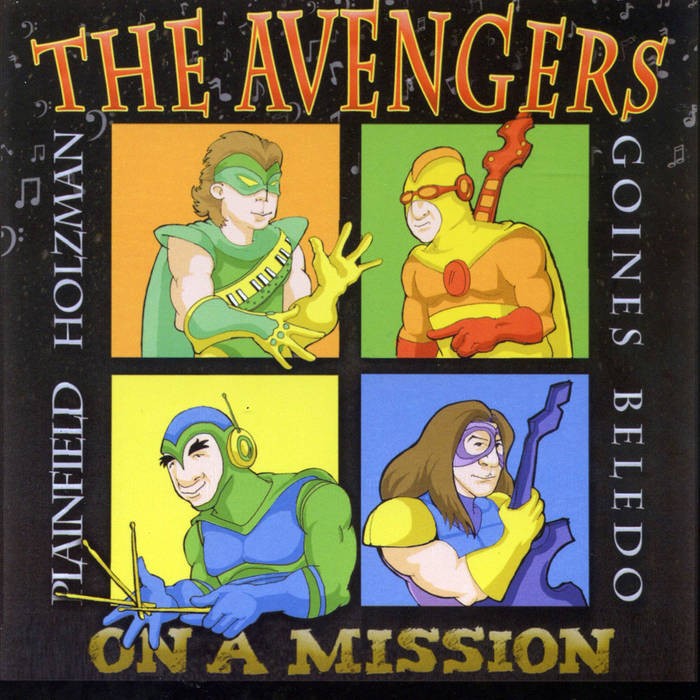 (released originally in 2013 on Gudari Records. Distributed from now now by MoonJune Records.)
A person could be excused if at first glance of the cover of The Avengers' debut album, they perceived it to be something other than an extraordinary progressive jazz-fusion album. (... After all, it is highly unusual to find a jazz band naming themselves after a group of comic superheroes and sporting an album cover depicting themselves in all their crime-fighting splendor!)The Avengers are led by guitarist Beledo -- composer of seven of the album's eight tracks -- and keyboardist Adam Holzman (who also contributed the album's great artwork), and supported solidly by renowned veterans, bassist Lincoln Goines and drummer Kim Plainfield. Dynamic depictions aside, once you're past the cover and digging into the disc, it becomes quickly apparent how truly special On A Mission is. The album wastes no time, opening with the powerful title track -- a lush, concise piece which immediately puts the group's sensitive dynamics and strong melodic sensibilities on display. The song is full of promise and adventure, and an accurate gauge of what's in store.Through this and everything that follows, the fretwork from Beledo is nothing less than spectacular and undeniably world-class. His rhythm work is fresh and vivacious. His tones are full-bodied, as evidenced through his towering, emotion-drenched solos and the polished lead voicings by which he articulates themes and melody lines throughout the project. Listeners will find Beledo's compositions to be intricate, inventive and masterfully plotted, producing songs that immediately render you captive.Holzman's bold, courageous chord work serves as the perfect backdrop for Beledo's grandiose sonic excursions. Adam (the former keyboardist/band director for MILES DAVIS, and current one with prog giant, STEVE WILSON) also proves himself to be an equally-capable lead voice, contributing some breathtaking solo work -- particularly evident on "Portia" and "Siddhartha's Return." While remaining poised, poignant and commanding in his supportive roles, the album features sparkling work throughout from Holzman on synth, organ and Fender Rhodes.Propelled by Goines' lively, ultra-solid bass work and Plainfield's flowing, understated, complimentary grooves, The Avengers leave no doubt that they are a stellar team -- lean, imposing, and undeniably worthy of their heroic credentials. "Raulendo," "No Big Deal" and the album's closer, "Jimmy O'Donnell's Air," further evidence the group's penchant for revving up commanding melodic themes while effortlessly hugging the tight, twisting turns with spectacular style and agility. Their light, joyous interplay and ESP-like collective continuity stands out over the disc's entirety.While there are many among the progressive ranks who view the "fusion" subgenre as a dying entity (or already deceased, even), The Avengers make a strong, compelling case to the contrary. This is profound progressive jazz-fusion; the stuff of legends: unafraid to flex its muscles and unleash super-human feats whenever the circumstances warrant such bold displays of musical gallantry.It is with great pride and privilege that MoonJune offers this triumphant, superlative work. Fusion this polished and articulate -- and "immediately essential!" -- deserves a world audience.

All compositions and arrangements by Beledo (except Track 4, by Marcus Miller)